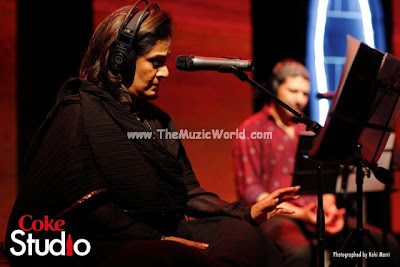 Kaddi saar we layee o rab saiyaan
My Lord, did you ever enquire what transpired with your man

Terey shah naal jugh kee kitiyan nenh
What your man has suffered in this world?

Kithay dhons police sarkar dee eh
Somewhere, those in power and with the means intimidate, harass and terrorize

Meri mannain tay tairian main mannan
If you agree with me, I will agree with you

Jey ay maang nai pujdi tain rabba
If you don’t look out for me God!

KEEP ROCKING
Posted by Shaan Haider at 12:25 AM

Thank you so much - i loved the song but reading it here made it so much more beautiful.
shukriya

Thanks a million for posting the translation.

Could you kindly post the name of the lyricist for this song. Thanks.

beautiful song....but knowing the lyrics and the meaning has made it more beautiful... thanks !!

This was wonderful. Thank you.

This is Absolute bliss. Credits go to the creator for making this happen :-)

I think it a ballad of Palay Khan, a freedom fighter against Britishers, somewhere near balochistan, written by Faiz Ahmed faiz

Awesome Lyrics and Urdu shayari, This song is in Urdu and I love Urdu songs, thanks for sharing!! :)

Perfect! Love the Poetry! and I like Urdu Poetry

Your blog provided us with valuable information to work with.every tips of your post are awesome. Thanks a lot for sharing. Keep blogging
Whatsapp Dp

Great info The lucky one came from the spot on your website because I saved it later as a favorite! Sad Poetry In Urdu Spot this writing, I really believe that this amazing site needs more attention. I'm probably coming back to read more, thanks for the info! sad poetry about love

Thank You so much for sharing lyrics of Urdu Poetry with us.

Thank you so much for your information and guide and help. I really enjoy this content. I hope you provide us again same thing
sadpoetry

Thank you so much for your information and guide and help. Such a nice work.
BestSadPoetry

Coke studio is most trending music show and i love its songs bcz of its speciality in all kinds of music like sufi , love, romantic, sad etc and on your blog i like the poetry lyrics. I'll be thankful if you visit my blog also.

Thank you so much for your information and guide and help. I really enjoy this content. I hope you provide us again same thing
Best Sad
Poetry 2021

Wow great lines
best Poetry
i love poetry
thanks for sharing it to us
also read: Sad Urdu Poetry

This is a great inspiring article. You put really very helpful information. Keep it up. Keep blogging. Looking to reading your next post. mother poetry in urdu